this was originally posted on May 25, 2009 as a normal entry, but I decided, as I seek work and make plans to enter the educational field, to make it 'the entry everyone sees upon arrival'. I have been keeping this blog, almost daily, for 9 years now. When I began, it was very cutting edge to do this - and I was a cutting edge web developer, so all was well. Now I've started to change my career; in 2009, based on some great experiences with kids and a long standing passion for education, I'm reorienting to study for a B.A. in Technology and New Media in Education. But it does mean that there are thousands of entries in this blog that were made in hundreds of moods.

Clay Shirky, teacher in the Interactive Telecommunications Program at N.Y.U as part of a discussion addressing, 'In the online world, is the notion of a public/private divide simply not applicable?'

I invite anyone who wants to get to know me to dive into my journal. You'll get to know me, and I like that! Just keep Shirky in mind :-)

tomorrow night I have an eggplant that is scheduled to become caponata bruschetta for dinner. is anyone interested in joining me? I've reduced the recipe down to 1, but it's still a lot of eggplant to get through and I need to add some protein (which will either be the stuffed chicken or the meatballs, depending on what I feel like/my guests want when the time comes. I eat around 7 for medical snack reasons.

My seizures started in January of 2000. 14 years, 11 months ago. I noticed that this year, because 15 years is the point at which I basically regain my life span. About 2/3rds of adult onset diagnoses die between onset and now. In July, I suggested to Laurie Beth Brunner that I might throw a party at Arisia to mark this fact.q

Two weeks ago tomorrow, my body decided it was time to try and kill me another way (10% of people with my diagnosis are dead within an hour of it happening, 30% within the day, when it suddenly plummets to 3% if you make it through that).

It is what it is.

I am not actually too celebratory today. So many dreams got so close this year to be snatched rather violently away from me. So often, people joke, ”Here's to another year I didn't die during!". This year was supposed to mark that, as a huge, positive step.

Instead. Well. Here's to another year I didn't die during.

It was pretty crap. And I really only had my phone, and FB, to talk to people with.

For you, my friends who are not on FB, I was going to take all my entries there, tonight, so you have an idea what happened. If you want to opt out, please do so.

For the record, it was pretty dull. I was semi-isolated all week do to extra infectiousness.

jjv is selling this building, so I need to look for somewhere else. I'm hoping to co-locate the business officially in the apartment (under last year's Cottage Food Act, which allows for small commercial kitchens at home. I am familiar with the rules for Somerville and Medford, where I know they are easily set up, and Cambridge, where they're fussy but it's ok. I wouldn't mind living in Central Square again. And I *really* mean Central Square. I want to avoid Malden, which makes it very difficult, but I need to do research elsewhere to know what's up).

Here is what I'm looking for:


I'm flexible on this; I could live with a roommate, but they would need to recognize that the kitchen is going to be set up for commercial use from the start. The ideal roommate situation would actually be a 2br apartment with an office; I could keep all the decorating supplies completely separate and aside from the baking could work entirely in there.

In a shared situation w/office, I would say $600 for a bedroom, $400 for the office (so the apartment would be $1600 for two bedrooms with someone else. In a one bedroom, I'd want the rent to max at $1200. A studio would be fine if it had a *real* kitchen. I need to be able to isolate small away from food prep areas while doing business work (the irony is if I'm just decorating cookies in the kitchen, she ignores me, because I am boring. If I'm decorating cookies in the kitchen and the door is shut, she'll desperately want to come in, but those are the state's rules).

I'm pretty sure this means I'm leaving Somerville, which will make Xander sad. I think maybe we'll just tell him I'm still living in Somerville, because while he'll say the other towns around here, when he's told we're going to Somerville, he'll happily exclaim, "SUMMAVIWWE!"

if you want to keep an eye on my cookies and cakes and well...really, me decorating anything that will hold still long enough for me to decorate (though that has not yet included the cat, though I did get icing on her the other day, but which *has* included Commander Xander, because I made a flower on his hand last week), this is the place to do it:

A while ago I heard about this movie. They were trying the new combination of fan-driven showings, followed by an online release. But all the local showings were in Dedham and Worcester, and my Somerville-based person was sad. So I did some research and found that I could also book it into a local theatre. And being the person that I am, I did. We're pretty sure I thought things through, but maybe not. I can't really remember.

KNIGHTS OF BADASSDOM follows three best friends (Peter Dinklage, Steve Zahn and Ryan Kwanten) and dedicated LARPers (Live Action Role Players) as they take to the woods to reenact a dungeons and dragons-like scenario fresh out of the mythical Middle Ages. Trouble arises after they unwittingly conjure up some serious evil in the form of a blood-lusting Succubus, from the pits of hell.

Fantasy and reality collide on the Fields of Evermore in an all-out epic battle of make-believe wizards, demons and assorted mythical creatures. Their courage and friendship is put to the test as they attempt to vanquish the evil they have summoned. Will the group prove to simply be foam sword-wielding LARPers, or true “Knights of Badassdom?” 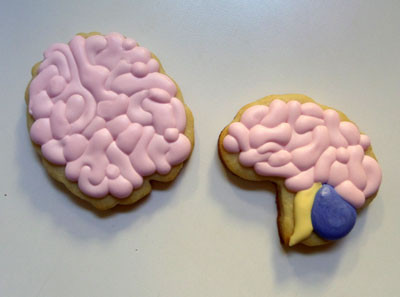 I created a 3rd & 4th cookie cutter, these being brains from the top and side. Then to show how they could be decorated, I printed the template I started with, and hand cut them out. This was the result.

the store with my cookie cutters is here: https://www.shapeways.com/shops/thespian 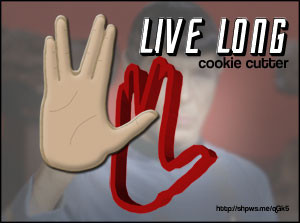 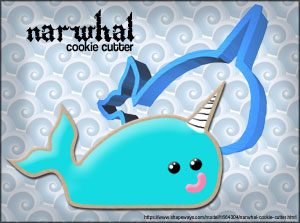 I just could not find a narwhal cookie cutter that pleased me. So I made a nice, saucy and cute one to grace the high seas (metaphor. cookies should only swim in milk).
Collapse